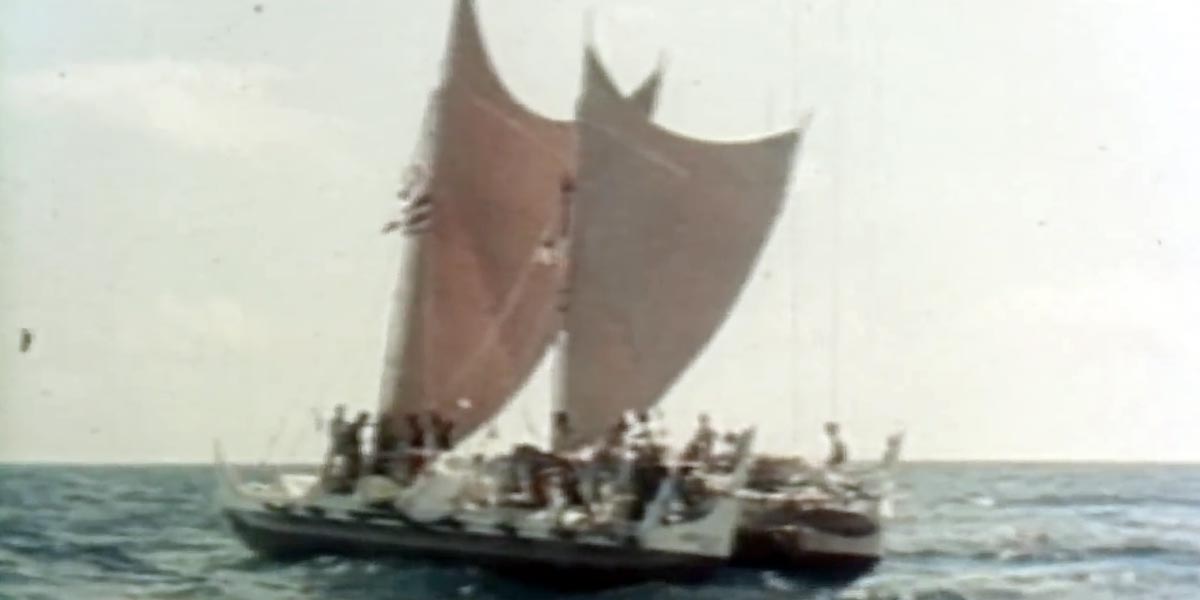 Hokulea in route during the historic journey from Hawaii to Tahiti. May 1976.
Photo courtesy of The National Geographic Society.

Up until the mid-1970s, the prevailing idea was that the Hawiian Islands were settled by accident—that voyagers from Tahiti and elsewhere found their way there without the specific intent of doing so, and once they had landed, they became stranded and never returned to the far away islands from where they originated. A small group of scholars, however, challenged this notion. Among them was Ben Finney, who was at that time a young graduate student at the University of Hawaii. Finney made it his goal to prove that Polynesian voyagers could have navigated throughout the Pacific with skill and purpose. The result of his efforts was a traditional sailing canoe called Hokule'a, which made an unprecedented and historic journey from Hawaii to Tahiti in 1976 using ancient methods.

The voyage of Hokule'a proved that two-way ocean travel between Hawaii and Tahiti by ancient people was, at least, possible. And the monumental journey was certainly not a solo effort on Finney's part. The voyage of the Hokule'a both coincided with and created excitement for the cultural renaissance movement that was already happening in Hawaii during that time, and several other people played important roles in the realization of the journey. Following the 1976 voyage, The National Geographic Society released a documentary on the endeavor. Finney himself published articles in various academic journals, and later published his own first-hand account in the critically-acclaimed book Hokule'a: The Way to Tahiti. Herb Kane, who was the co-founder with Finney in the project, spoke about his experience at length. The canoe's navigator, Mau Pilaug, has been the subject of considerable discussion due to his invaluable contribution to success of the voyage. Many of the crew members also told their stories over the years. One person who stepped out of the spotlight and into relative obscurity, however, was Hokule'a's captain, Kawika Kapahulehua. This is his story.

Kawika Kapahulehua was born on the island of Hawaii in 1930. His father was originally from the island of Niihau, and his mother was from the island of Hawaii. Kapahulehua had one older brother. It was the traditional way for women to return to their home village to give birth to their children. While Kapahulehua was still an infant, the family relocated to Niihau, where his father was from, so that the father could care for his aging parents. On Niihau, Kapahulehua grew up speaking Hawaiian as his first language&emdasha rare thing in the 20th century—and following an old Hawaiian way of life. When he was 13, however, his parents separated, and he moved to Kauai with his mother and brother. This move was, in part, motivated by the mother's desire for greater opportunity for her two children. On Kauai, Kawika learned English quickly. At age 16, he left for Oahu and did not return.

As a teenager in Honolulu, on Oahu, the young Kapahulehua worked as a laborer at the Dole pineapple cannery, then later took a job working on a shuttle bus at Pearl Harbor. When he got laid off, he worked at Waikiki as a beachcomber. He was industrious. He had an apartment with some friends. They worked long hours and slept in shifts. Kapahulehua became the de-facto cook for the house—partly due to his disposition for taking responsibility, and also because of his relative maturity in the group.

Some of the traditional arts that Kapahulehua learned as a child on Niihau were valuable in the booming tourist economy in the years after World War II. He worked as a catamaran pilot at Waikiki, and also performed in a musical act called The Catamaran Boys at the popular Hilton Hawaiian Village. When an opportunity with an airline opened up, however, he took it, and before long, Kapahulehua had found his way to California. He was barely 20 years old.

In California, Kapahulehua quickly found his stride with the airline. He made impressions early on for his no-nonsense communication style and conscientious work ethic. At one point, he was given a rare opportunity to take responsibility in a crisis, and his problem solving ability made a strong impression on some in the management chain above him. He eventually moved into a supervisory role in the cargo department, where he established the track for the rest of his career.

Outside of work at the airline, Kapahulehua spent a good amount of his time sailing, using one of the marinas in the Los Angeles area as his home port. It appears that most of his sailing ability was developed during this time, stemming out of things that he learned as a boy on Niihau. He attracted attention from other sailors for his remarkable ability to read the ocean currents and predict the wind and, eventually, competitive teams in the area began recruiting him to join their crews. One team that approached Kapahulehua was consistently losing races. Kapahulehua asked them if they wanted to win. They said they did. He asked them if they really wanted to win. They said that they did. Kapahulehua said he would help them on the condition that they did everything he said; if they complained or grumbled, he was out. When the day of the race came, as the story goes, none of the other boats even came close to beating them. It was a remarkable finish, and others took note of the factors that led to the boat's success.

Small victories opened doors for larger opportunities. Eventually, Kapahulehua was approached by the Hollywood actor James Arness to help sail his boat Seasmoke, a 58-foot catamaran designed to sail in the annual blue-water race from California to Hawaii. In 1968, the crew broke records for the 2,500-mile crossing and arrived 4 hours ahead of even their planned arrival.

It was around this time that Kapahulehua married Birdie Stein, born in 1923 and 7 years his senior. Their first son was born with Down Syndrome. Within a year or two after their son's birth, Kapahulehua transferred jobs to Honolulu and the family relocated to Hawaii, settling in Hawaii Kai. This allowed Birdie to take a more full-time role in caring for their son while Kaphulehua took on greater responsibility with work.

In addition to working at the airline, Kapahulehua also captained a catamaran yacht on evening dinner cruises in the early 1970s. When the Hokule'a was in the final months of preparation for the journey, a vacancy opened for a captain. Herb Kane was referred to Kapahulehua. Within short time, Kapahulehua proved his value to the project, providing needed guidance in the preparation logistics and planning for the voyage. He was the last member to join the crew.

As has been documented elsewhere, the voyage of the Hokule'a was a difficult one, frought with internal conflict from before the time the expedition began; conflicts of interest, racial tension, and inflated egos threatened the endeavor at nearly every stage. During the 35-day crossing to Tahiti, a faction of the crew staged a mutiny, compromised the scientific integrity of the expedition by using contraband food and drugs, and refused to acknowledge the chain of command for the remainder of the journey. Upon arrival in Papeete, the navigator, Mau Pilaug, broke away in disgust, denouncing the Hawaiians before returning to his home island in Micronesia. Finney, mentally and physically exhausted from the journey and needing to attend to other responsibilities on Oahu, also did not stay long. The other members of the expedition flew back to Honolulu in the days after. Alternates for the original crew were brought in to sail the Hokule'a back to Hawaii. It rarely mentioned, but it's worth noting that Kapahulehua was the only member of the expedition to make the journey both ways.

While Kapahulehua himself has been a person of historical importance since at least the 1970s, I first became specifically interested in his story in 2010, while living on Oahu and researching a separate biography. In the course of my other research, I was asked to help bring Kapahulehua's story to light. That said, however, I waited several years before getting involved. It's a tough story to tell, and many of the tensions that existed on the Hokule'a in 1976 still persist today. Nevertheless, from early on, I was impressed by Kapahuleha's character. He was someone who let his actions speak louder than his words, who sought to do the right thing, who took responsibility and tried to create peace in his own small part of the world, and who kept his word, regardless of the cost. In a time of so much self-aggrandizement, egotism, and unprincipled behavior, I felt Kapahulehua's path through life was a story worth telling.

If you'd like more information about the book, feel free to contact me. You can also subscribe to my newsletter for occasional updates about this and other work.